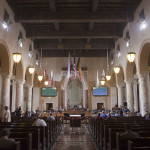 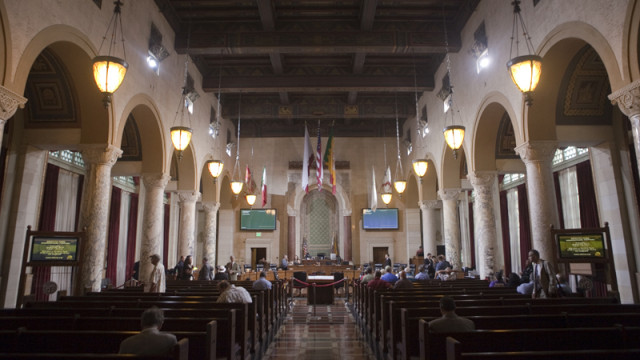 The Los Angeles City Council voted Wednesday to prevent developers who have project applications pending at City Hall from making campaign donations to elected officials or candidates for municipal office, although some members expressed concern over the effectiveness of the ordinance.

City Councilman David Ryu introduced the proposal to ban developer contributions, which he said can interfere with the ethical commitments candidates make when running for office.

“Doing nothing will cost us the trust of Angelenos,” Ryu said. “Trust is the basis of our power, and in any government by the people and for the people, the public’s trust must always be held as our highest goal.”

Some council members said they were concerned the ordinance wouldn’t restrict contributions to independent campaign committees, which can be clandestine and more difficult to track.

“I don’t think this is a particularly groundbreaking or particularly important piece of legislation today,” Councilman Mike Bonin said. “When it comes to campaign finance reform, all we’re doing is feeding a vitamin C tablet to someone with pneumonia until we do full public financing (of campaigns).”

Councilman Mitch O’Farrell said the measure “will just increase the play for independent expenditures,” adding that his staff scrutinized contributions to his own campaign in 2017 and returned checks to developers with pending projects.

“It takes a lot of work, but a campaign can do that,” O’Farrell said. “I don’t know if we need an electronic filing system for us to take on that responsibility now.”

The changes are an effort to create an enforcement policy on developer contributions before the 2022 general election. Fundraising for that Los Angeles city election starts in March.

In November, the council’s Rules, Elections and Intergovernmental Committee discussed three proposed laws for restricting developer donations. The measure approved by the council Wednesday will bar political donations by developers who have projects pending with the city, continuing for a full year after a final decision is made on the project. The city will create a database of developers who are restricted from making donations.

The council also voted to have the committee reexamine possible restrictions on behested payments — which are donations solicited by candidates or elected officials for various charities or causes. The city Ethics Commission has proposed guidelines that would restrict such payments from developers, lobbyists, lobbying firms, bidders, contractors or people who attempted to influence the elected official in the previous 12 months.

According to the Ethics Commission, eight of the 10 donors with the most behested payments over the past five years had done business with the city within that period.

The behested payment ban would include several exceptions, including payments that are solicited because of a state of emergency.

Los Angeles is the first jurisdiction in the country to ban developer political donations, according to Ethics Commission staff.

Efforts to update the city’s campaign-finance laws began after a November 2018 FBI search of Councilman Jose Huizar’s home and offices. He was also named in a search warrant outlining the FBI’s probe of possible bribery, extortion, money laundering and other crimes as part of a corruption investigation at City Hall focusing on huge real estate investments from Chinese companies. No one has been arrested or charged as a result of the investigation.

City law limits contributions from non-individuals, with the charter setting limits on such donations, adjusted annually to reflect changes in the Consumer Price Index. The current maximum is $226,500 for City Council candidates.