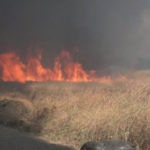 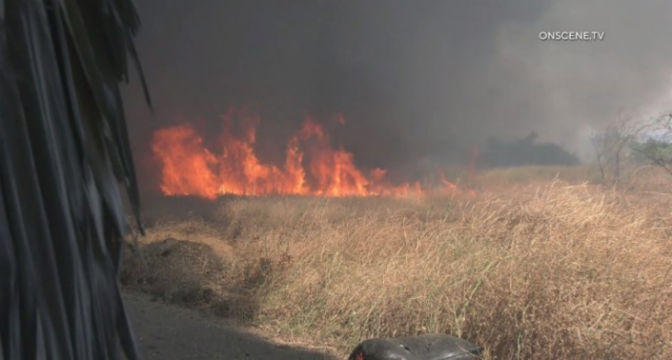 A fire scorched about 7 acres of thick brush in the Sepulveda Basin and displaced at least 100 homeless people, some of whom watched as the flames consumed their tents and belongings, authorities said Wednesday morning.

The blaze was reported about 3:30 p.m. Tuesday in the 6300 block of Balboa Boulevard near Balboa Park, according to the Los Angeles Fire Department.

The first arriving firefighters discovered more than 3 acres of grass and brush were on fire near homeless encampments in the northwest portion of the flood control basin, the fire department said.

Explosions from propane cylinders in the encampments could be heard from within the fire’s perimeter as firefighters moved as many as 100 homeless persons from the path of the fire. Water dropping helicopters stopped progress of the fire in less than 90 minutes, the LAFD said.

“The Los Angeles Fire Department will continue to work through the night to ensure that all embers are extinguished, and that all hazards associated with the fire are mitigated,” LAFD Assistant Chief Patrick Butler said.

No injures were reported and the cause of the fire was under investigation.

Homeless services officials were called to the scene to help relocate those displaced. The Red Cross was also reported to be deploying teams to the area.\